Its February 28 and I am snowed in awaiting storm Emma’s imminent arrival. I have promised that I will post a blog every month and as you can see I’m a deadline person.  I was asked recently about the significance of the ‘Rope’ behind me in the picture on my website.  So by way of clarification, it is not a rope; it is in fact two shoe laces totalling 17.5 metres in length. There are two shorter laces in the installation 5.5 metres (french knit) and 4.5 metres (Computerised knit). Why Carrickmacross laces? Just a play on the name of the lace for which my town is famed. I refer to the as ‘my phoenix rising from the ashes’ (obviously resulting from the flames which helped me see the light!)

As a business counsellor I was preoccupied with pricing, time and motion studies value propositions etc. Then I decided to do an art and design degree where, it appears to me, nothing makes financial sense. The intangibility of concepts, ideas and creative exploration are often considered valueless – mere notions! Without the tangible outcome or product the time spent will not yield a monetary return. This low return on time invested is further compounded when the process of bringing the idea to fruition is labour intensive.

The large laces are made from pure New Zealand wool and constructed by the same method as a standard woven shoelace. The process of weaving the threads by hand around a core took 336 hours. The threads took 80 hours to machine knit to make them large enough to weave and the core took another 36 hours to make. I wanted to make the point that if the purchase price for the piece did not, at least, match the same as I had earned for the same hours in my previous role, then I had devalued my earning potential by doing an Art and Design degree. I also had a comparative price if I was to get minimum wage and if I was to be benchmarked against a male of comparative experience and education. I did not include materials or concept development in the pricing. The visual impact of the message was strong enough to be selected for the RDS student art awards.

There is nothing to compare to the handmade always support your local artisan maker. 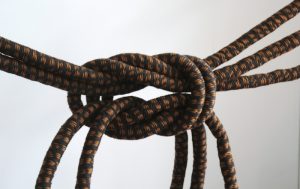